Donald Varney
Friday, 05 July 2019
1 Replies
188 Visits
Subscribe
This has been a great year for swarms - I've been called for several already. In addition my observation hive swarmed up into a nearby tree and was captured and installed in a new box. Not to be outdone, the remaining observation hive swarmed again yesterday on the 4th of July. I knew they were up to something because I could hear a queen/queens piping all the night before and I finally was able to spot a massive swarm cell in the hive. When I lifted the cover to look, they all absolutely looked guilty - like "we ain't doing nothing". 9:30 the next morning I happened to look out and see a cloud of bees flying around a pine tree in my yard. I ran out and watched them swirl around me and then coalesce onto a branch about fifteen feet in the air. I put down a plastic drop cloth, brought out a nuc box with frames and got my trusty five gallon pail on an extendable pole and in no time they were all settling into the box. I put them in the apiary and went off for beer and ribs. When I got home I noticed that unlike other past swarms, a significant portion of these were hanging on the outside of the box and I began to suspect their brush with freedom had been too brief and there was a risk that they might head out again. I thought about what to do and then the obvious answer appeared. I dug into one of my larger hives and found a frame with honey, pollen and milk brood. I found the queen on another frame so I could safely take this frame. I opened the swarm's box and removed one of the empty frames and put this frame of brood in. Within half an hour all the bees were inside and today I see they are flying normally and collecting nectar and pollen. I imagine they are astounded that their queen has already produced brood but that brood pheromone is clearly a potent behavioral control. I may think of doing that with future swarms as well - no question of settling down once they smell brood.
0
There are no comments made for this post yet
Oldest First

Donald Varney
2 years ago
·
#2657
The insanity continues. While I have been called for a few outside swarms, my own hives seem to be in overdrive. I know it isn't going to be a great year for honey production unless they cut it out but it certainly is an amazing thing to watch. I assume the conditions must be just right because I've never seen anything like it. I can't figure out how they are maintaining the pace. Swarms that build up and swarm. I catch the swarm and then they both build up and swarm. I literally started with four packages. I got five external swarm calls. I presently have twenty colonies plus one swarm that didn't like the box and left when I wasn't looking. Who knows if there are others I missed. I have a "swarm tree" close to my bee yard which has become a favorite for the bees and for me because it is only about ten fee tall.Having seen so many swarms in my own yard I am starting to recognize the signs and I'll guess there will be more over the weekend. My Observation hive is clearly building up for its fourth swarm. I am flat out of equipment - building frames on the fly and using five frame boxes. Forget any more double deeps we're going right to supers because that's all I have left. The goldenrod is starting to open so I suppose there will be no summer dearth to slow things down. Sadly, I guess I'll just have to let some of them go into the wild because I just can't support any more. It will provide a great opportunity to try different setups and locations for overwintering though. I am curious though if anyone else is experiencing this. Is it just the way the weather has been or is it maybe a local phenomenon in my location due to the physical characteristics.I know I said I wished for a few swarms this year to build up but I guess you have to be careful what you wish for. Anyone else having this experience?
Attached is a picture of one of the more "creative" ones. 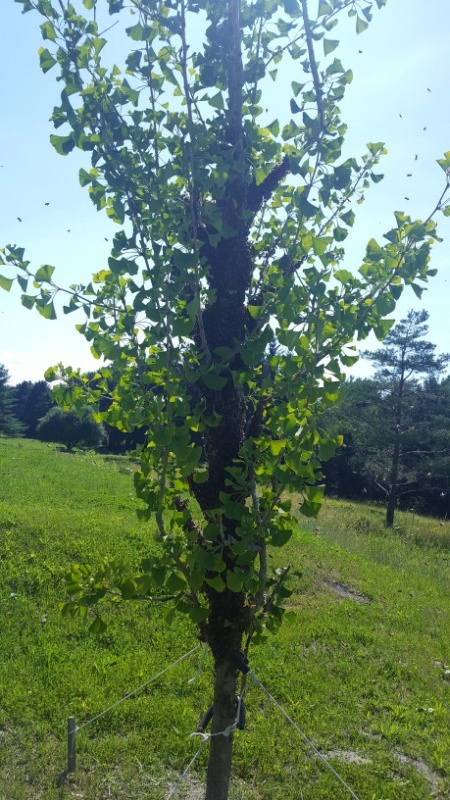